WHILE EVIDENCE THAT THE ‘GOVERNMENT’ IS JUST A COMMERCIAL ENTERPRISE IS EVERYWHERE, WE HAVE BEEN ‘CONDITIONED’ NOT TO SEE IT!

Did you know that 98% of the Law Schools in America and England do not include Constitutional Law as a part of their law curriculum? The reason for this phenomenon is because Constitutional Law does not apply to or affect the enforcement of statutes, codes or administrative regulations, which have replaced constitutional law, the common law, public law and penal law and which have been designed to control you.
(Pg 8, Judge Dale’s The Matrix and the Constitution) 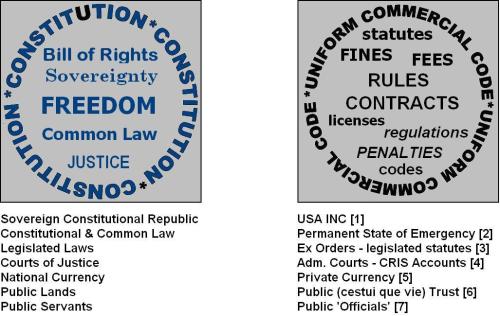 Retired Judge Dale has exposed the truth about our history and our legal system.  From Judge Dale’s The Great American Adventure:
The Federal and State Governments are not real. They are privately owned corporations [listed on Dun and Bradstreet] called governments. . . and the law is nothing more than their corporate regulations called statutes.
(pg 102)

These corporate laws and regulations are called statutes and their affect and control over human beings is deceptively obtained by consent through civil contracts. [See #5 below.]
(pg 99)

Everything they have been doing is one gigantic fraud and all of it at our expense!
(pg 53)

‘We the People’ have been deliberately deceived!

To find solutions to the problems that face us all, we need to discover what our so-called government ‘really is’ and how it ‘really works’.

What we have been taught in school and on the media is the “deviant creation” of the global elite, who have used their ability to create and control money to deceive and enslave the American people.

Their admission, in the Technical Manual of the US Air Force, 1979, Silent Weapons for Quiet Wars, revealed their strategic plan of action against the American population:
Experience has proven that the simplest method of securing a silent weapon and gaining control of the public is to keep the public undisciplined and ignorant of the basic system [by] . . .
– disengaging their minds
– engaging their emotions
– rewriting history and law and exposing the public to the deviant creation . . .
(pg 36)

The corporate governments and their courts, only have jurisdiction over corporations. Corporations have no rights or jurisdiction over living people and are only provided considerations, which have been pre-negotiated in contracts by their directors. Otherwise, they’re governed totally by commercial law, and so are you!

(Pg 13, Judge Dale’s The Matrix and the Constitution)