Paraguay farmer educates his neighbors about Monsanto:
“We are going to talk about the production model of GM soybeans promoted by Monsanto. It’s a true multi-national company. It’s everywhere in the world. It’s objective is to control all of the world’s food production through farmerless farming. The result is that Monsanto is depriving us of our food sovereignty, of our ability to feed ourselves without depending on anyone else. That is why we say that we must fight for our independence – for our land. We must defend our communities, our families and our country.” 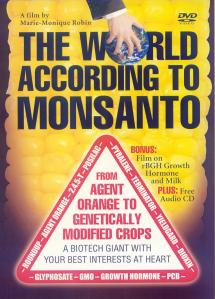 The approval of GMOs was not a scientific decision but a political one. Initially foods derived from new plant varieties were to be evaluated the same as foods derived from traditional seed propagation. But in May 1992  the Bush Regime created “The Principle of substantial Equivalence.”  This decision applied to all products of biotechnology. The Bush regime decided none should undergo any special testing or evaluation.

Michael Taylor was Deputy Commissioner of Policy under the Bush regime. He participated in policies regarding GMOs. He had no background in science or agriculture. As an attorney his role was to implement a policy that would benefit one of his former clients . . . Monsanto.

FDA claims that there is an overwhelming consensus in the scientific community that GMOs are as safe as their conventionally produced counter parts. However over 44,000 pages from the FDA’s own files are prove positive that this is a gross lie.

The World According to Monsanto perfectly exemplifies that the dead legal fiction known as The Corporation is a parasitic blight consuming and destroying the natural world for no better reason than to produce profit and engage in unlimited growth.

Perhaps one day all of humanity will recognize this, deconstruct this business model, fire paid liars (PR people) and create another model that values life on planet earth.

This same ‘scam’ has been perpetuated regarding water fluoridation and mercury laden vaccines.  Comparative studies are not funded by the ‘usual’ funding sources when there is a good chance these studies would expose the corporate profiteers and make them liable for the harm they are causing. And when independent studies are completed, the researchers have difficulty getting them published and the media doesn’t report them.

One response to “Planetary Destroyer: Monsanto”