NASA is responsible for promoting man-made global warming and the false reporting of global temperatures.

NASA’s assessment of ‘the value’ of human beings:

NASA and its corporate partners are not friends of the people. It is very important that we all understand that. NASA – The Future of War (presented in 2001) is really grim. Our future depends on us understanding: who is looking out for our welfare and who is seeking to exploit and/or harm us.

Which part of climate change can be attributed to intentional weather modification? The public so far has had no oversight regarding these ‘programs’. Rosalind Peterson (very reliable source) exposed this 4 years ago:
Experimental Weather Modification Coming to Your Neighborhood, Soon (Nov, 2007)

What is it called when Congress passes legislation by stealth without informing the public? HAARP was ‘classified’ in 1987.  HAARP is an ionospheric heater. Did you know HAARP was approved just prior to the Club of Rome’s report in 1991 that proclaimed global warming is a real threat and blamed humanity (not corporations or the globalist’s WAR MACHINE) for it? The Club of Rome was founded by eugenicist Rockefeller. [1]

NASA is heavily engaged in the Transhumanism movement (as the Future of War presentation demonstrates) and in the Frankenscience creation of a ‘brave new world’.  Did you know about it, folks? But yet it is up and running and somehow being funded.  Some are calling it bioconvergence.

NASA’s Bio, Nano, and Robo (AI)
At least NASA admitted (back in 2001) they had particular concerns about their high-tech (non) solutions. 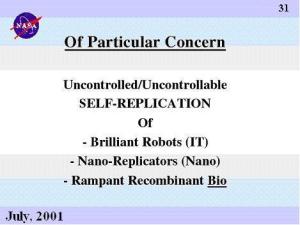 Their concerns were justified.

This is not science fiction, it is really going on across the country.

This is the new techno-science that is is supposed to save us from global warming and/or resource depletion (peak oil being another globalist/Rockefeller fabrication) using GMO crops, lab created species, clones, borgs, “tele everything” and a vast array of new high tech really nasty weapons to get us all to comply. These creeps are in the process of ‘evolving mankind’ into a Post-Human state. How did you vote in the techno-human evolution election? Apparently the decision was made prior to 2000 and NASA announced it in 2001. This is being done by stealth. Obviously many humans would strongly oppose this insanity.

Knowing about and understanding The Age of Transitions ( . . . total reconstruction of the human mind, body and spirit from the inside out) is crucial for our species. We are at a critical crossroads. Just when we are discovering new and amazing facts about natural humans and their DNA, the ‘controllers’ are seeking to alter us into bio-techno-man.

It is time to weigh in
Do you wish to remain an amazing natural human or be turned into part man part machine Borg? You need good information to make that choice. Once you accept a microchip implant or human augmentation, the choice is no longer yours. Everyone needs to educate themselves and their families about the Age of Transitions. They also need to educate themselves about what what is really means to be a fully empowered human: In Defense of Humanity

This is so important. Us humans have been demonized and blamed for the nightmare The Corporations and profiteers have created. The mainstream media that ‘they control’ could have been used to promote lots of great solutions. They could have stopped pursuing globalization and started promoting conservation and free birth control in 1971 after the Limits to Growth report came out. Where were the public service announcements? Why weren’t the corporations put under strict control and all their monopolies busted up? The ‘controllers’ could have stopped suppressing amazing new technology solutions. Instead the media has been used to make the population brain dead consumers. Incidentally, NASA announced their plan to use heavy Psywar on the public and that is exactly what they are doing. Take note of the current TV ‘programming’.

Us ‘natural’ humans (some think we will be called ‘legacy’ humans)
who chose to remain natural humans, can then work together to stop privatization and pollution and use Reduce-Reuse-Recycle as our solution . . . not Frankenscience. Moral humans are needed to evaluate all new technology. Dr Strangelove needs to be permanently retired. Think how much pollution would be reduced and how much fuel would be saved if we could get Dr Shiva’s solution implemented: grow food staples locally and just import the fancy spices.

Relocalization is the solution . . . not Frankenscience, bizarre technology and the creation of the Post-Human. The Transhumanism issue has been framed Bio-Conservative versus Techno-Progressive. Don’t let ‘them’ frame this issue. It is really pro-human versus anti-human.

Let’s not forget ‘natural mankind’ is not responsible for the endless wars . . .  TheMoneyMasters are. They have been fomenting (and profiting from) wars for hundreds of years – if not longer.

The Transhumanists should take the globalists and TheMoneyMasters off to a island somewhere and experiment on transforming each other – to something more human.

Why science when astray

Biotechnology and “The Corporation’s” race to own nature

This entry was posted in corruption, Transhumanism and tagged club of rome, global warming, NASA, technology, transhumanism. Bookmark the permalink.

One response to “NASA, global warming and Transhumanism”