And the Bankers Manifesto of 1892 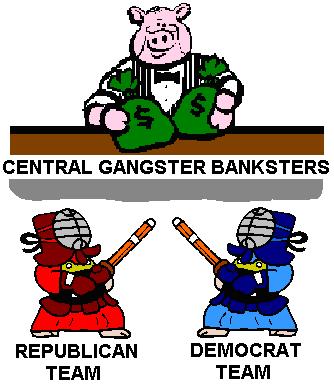 “When through the process of the law, the common people have lost their homes, they will be more tractable and easily governed through the influence of the strong arm of the government applied to a central power of imperial wealth under the control of the leading financiers. People without homes will not quarrel with their leaders.”

It is amazing to watch how much of the population in the United States has developed such intense team loyalty.  To listen to Ohio State University and Michigan State fans before or during their annual game, you would think the guys on the field were locked in a mortal winner-takes-all battle. And fans have been known to cry or get seriously depressed if their ‘team’ loses.

The team loyalty ‘religion’ is also an integral part of the divide and conquer strategy being used on the population of the U.S. by the global gangster/bankers.  Some people actually admit they are Democrats or Republicans for no other reason than that’s what their parents were. Currently Team Republican seems to prefer O’Reilly and FOX news and Team Democrat are fans of Olberman and MSNBC. This is NOT an accident that the media (controlled by a few huge corporations) constantly beats the Democrat versus the Republican (or vice versa) drums. It is orchestrated to keep us divided and prevent us from noticing what is going on behind the curtain.  If we woke up and realized that Washington DC has become a replication of the movie The Godfather and Ben Bernake’s testimony to Congress was exactly like Michael Corleons, we’d recognize why our economy is on the brink of collapse and who is REALLY responsible.

In the early 1900’s US Congressman Charles A. Lindbergh, Sr. from Minnesota revealed The Bankers Manifesto of 1892 before the US Congress sometime during his term of office between the years of 1907 and 1917 – to warn the citizens.

Perhaps the gangster/banksters got the idea of promoting a rivalry (as a smokescreen) from the Hatfields and McCoys which took place from 1878-1891? The Hatfield-McCoy feud (1878 – 1891) is an account of American folklore that has become a metaphor for bitterly feuding rival parties in general.

The Bankers Manifesto of 1892

“We (the bankers) must proceed with caution and guard every move made, for the lower order of people are already showing signs of restless commotion. Prudence will therefore show a policy of apparently yielding to the popular will until our plans are so far consummated that we can declare our designs without fear of any organized resistance. The Farmers Alliance and Knights of Labor organizations in the United States should be carefully watched by our trusted men, and we must take immediate steps to control these organizations in our interest or disrupt them.

At the coming Omaha Convention to be held July 4th (1892), our men must attend and direct its movement, or else there will be set on foot such antagonism to our designs as may require force to overcome. This at the present time would be premature. We are not yet ready for such a crisis. Capital must protect itself in every possible manner through combination ( conspiracy) and legislation.

The courts must be called to our aid, debts must be collected, bonds and mortgages foreclosed as rapidly as possible.

When through the process of the law, the common people have lost their homes, they will be more tractable and easily governed through the influence of the strong arm of the government applied to a central power of imperial wealth under the control of the leading financiers. People without homes will not quarrel with their leaders.

History repeats itself in regular cycles. This truth is well known among our principal men who are engaged in forming an imperialism of the world. While they are doing this, the people must be kept in a state of political antagonism.

By thus dividing voters, we can get them to expand their energies in fighting over questions of no importance to us, except as teachers to the common herd. Thus, by discreet action, we can secure all that has been so generously planned and successfully accomplished.

Capital must protect itself in every way, through combination and through legislation. Debts must be collected and loans and mortgages foreclosed as soon as possible. When through a process of law, the common people have lost their homes, they will be more tractable and more easily governed by the strong arm of the law applied by the central power of wealth, under control of leading financiers. People without homes will not quarrel with their leaders. This is well known among our principle men now engaged in forming an IMPERIALISM of capital to govern the world.

By dividing the people we can get them to expend their energies in fighting over questions of no importance to us except as teachers of the common herd. Thus by discreet action we can secure for ourselves what has been generally planned and successfully accomplished.

So what is it that both Team Republican and Team Democrat have in common that the gangster/banksters don’t want us to come together on? Here are just a few very likely possibilities:

Finally, every time I ask ANYONE if they feel like we are drowning in corruption they respond with an emphatic YES!

We need a real awakening and we need to recognize who our common enemy is:

The globalists, i.e. the entire centralized global banking cartel (the gangster/banksters aka The MoneyMasters) and their ‘pals’ such as: the Bank Of International Settlements (BIS), International Monetary Fund (IMF), Club Of Rome, The Committee Of 300, the Central ‘Intelligence’ Agency (CIA), the Council On Foreign Relations, The Tri-Lateral Commission, The Bilderberg Groups, the ‘Federal’ Reserve System, the Internal Revenue Service(s), Goldman Sachs, Israel and the Israeli lobby, the Vatican, the City of London, Brussels, the United Nations, the Israeli Mossad, and the primary chosen mouthpiece of the beast, the Associated Press (AP).” For more info about the globalist’s ‘agenda’, read The ‘City’ World Conquest

Ellen Brown of Web of Debt is promoting an end to the Central Bankers control of our economy and a restoration of sound monetary policy: Campaigning for State Owned Banks

My very first awakening into ”reality’ regarding globalization was watching TheMoneyMasters. It took me several days to digest a) the magnitude of lies and deception that is ongoing and b) the serious implications the globalists and the corrupt central banking system represents to our country and our families. But, I recovered.

3 responses to “Our Political ‘Teams’”